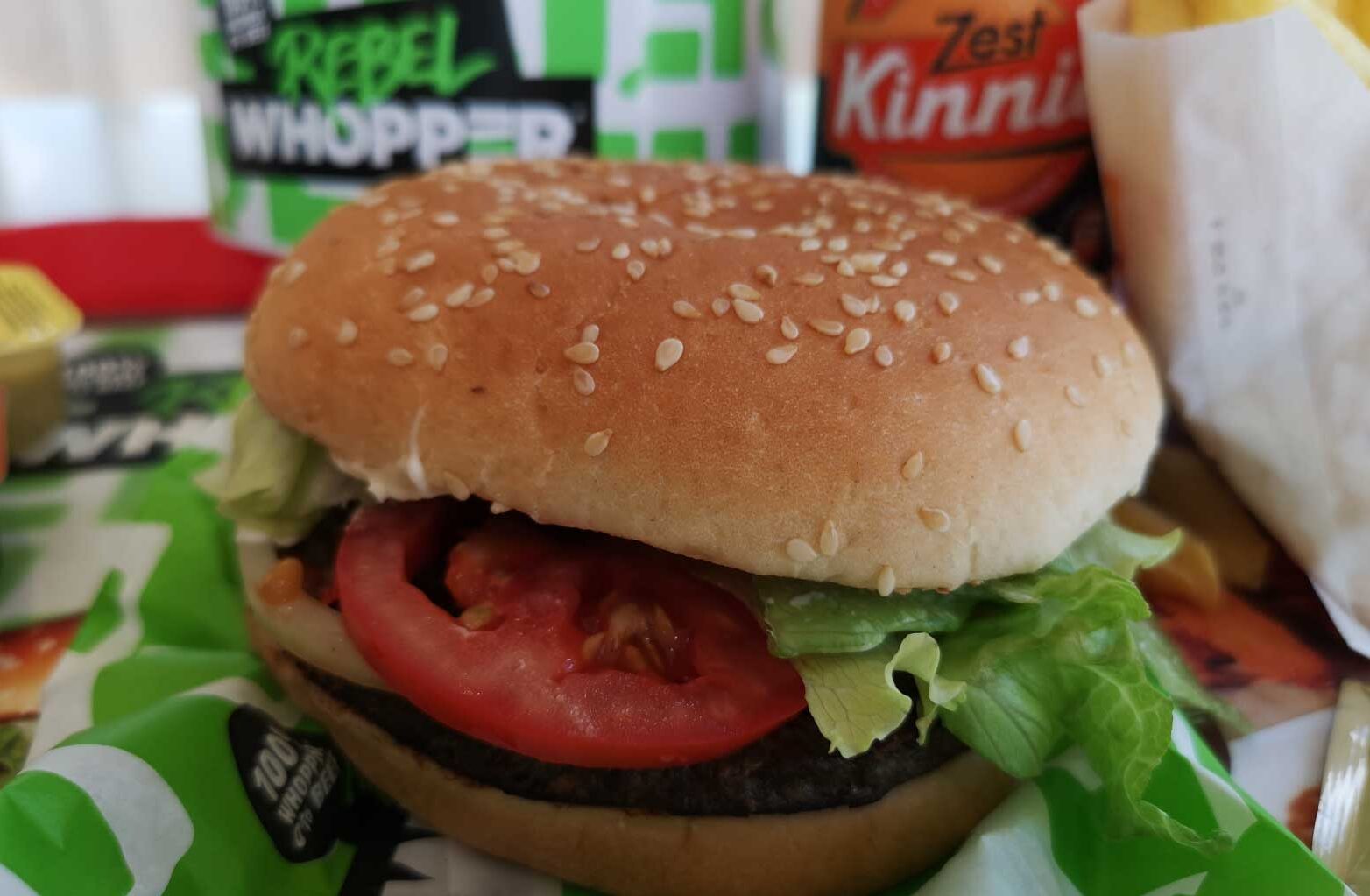 We tried out Burger King’s new plant-based burger, the Rebel Whopper; 100% Whopper 0% Beef.  This burger arrived in Malta in November before it hit the counter in places like the UK (where it has been launched in January to coincide with Veganuary … but more about that later on).

Some info about the Rebel Whopper. The burger is produced for Burger King by The Vegetarian Butcher. If you order it as it is from the counter, it will come with mayo, yet you can ask for this not to be placed in your order thus giving you a meat-free burger to enjoy. The Rebel Burger now complements the existing Veggie Bean Burger from Burger King, which can also be taken without cheese and mayo. When it comes to taste, I like both, although they taste totally different from each other so one cannot compare.

So now to the surrounding controversy whether the Rebel Whopper is vegan or not. This stems from the fact that the Rebel Whopper is grilled on the same grill that their meat burgers are grilled. Because of that some vegans are saying that since it touches the same apparatus that cooks meat then it is contaminated. In my opinion, the Rebel Whopper (without mayo) is vegan because the ingredients are all plant-based. We supported the introduction of the Rebel Whopper on it’s launch locally last year, and we were glad to see that both PETA UK and Veganuary share our same reasoning.

GREAT NEWS! @BurgerKingUK is bringing The Rebel Whopper to the UK – a delicious plant-based burger which can be made #vegan by ordering it without mayo. https://t.co/ss4ICmdR9d

What did Veganuary say

There have been a number of people who have criticised the Rebel Whopper saying it’s not vegan. Veganuary explains the issue well in their statement.

“We understand that for some people being vegan is about personal purity – not wanting to ingest any form of animal product including even trace amounts, and we respect their choice. But we know that most people go vegan to spare animals from suffering and/or reduce their environmental impact, and eating a plant-based burger – whether cooked on the same grill as a meat one or on a separate vegan grill – will have exactly the same impact for animals and the planet. The same amount of suffering will be spared, the same amount of forest and water will be saved, and it will be the same reduction in greenhouse gas emissions. In other words, for all of the important issues that Veganuary – and most vegans – are trying to address through their food choices it makes absolutely no difference whether the plant-based patty is cooked separately or on the same grill as the meat.

What does make a big difference to animals and the planet is when non-vegans choose a plant-based menu option, enjoy it and then order it again. And that’s exactly who Burger King’s Rebel Whopper is aimed at, non-vegans who want to reduce their meat consumption for health or environmental reasons or are considering going vegan. It isn’t aimed at existing vegans. Burger King is not trying to ‘capitalise on the vegan pound’; it is catering for the growing number of flexitarians and meat-reducers. And this is something we should welcome if we’re vegan for the animals or the planet, not just because every single plant-based meal makes a difference in and of itself, but it will also hopefully help the people choosing the plant-based option to see that vegan food is tasty and convenient and lead them to order it more often. ”

You can read their full statement here. I think this statement says it all. Furthermore I believe that we should be pleased that fast-food chains are taking up plant-based food. On one part we cannot criticise them they they just profit from dead animals and then when they do offer a plant-based option they get criticised as well. This makes it look like a lose lose situation, so might as well ignore the plant-based community. The future is plant-based and we embrace all food chains that are moving in this direction.  Well done Burger King. Let’s hope others follow. Yoga and its link with vegetarianism/veganism

Actually a fantastic burger. My partner tried it out and didn’t realise he wasn’t eating a meat burger.