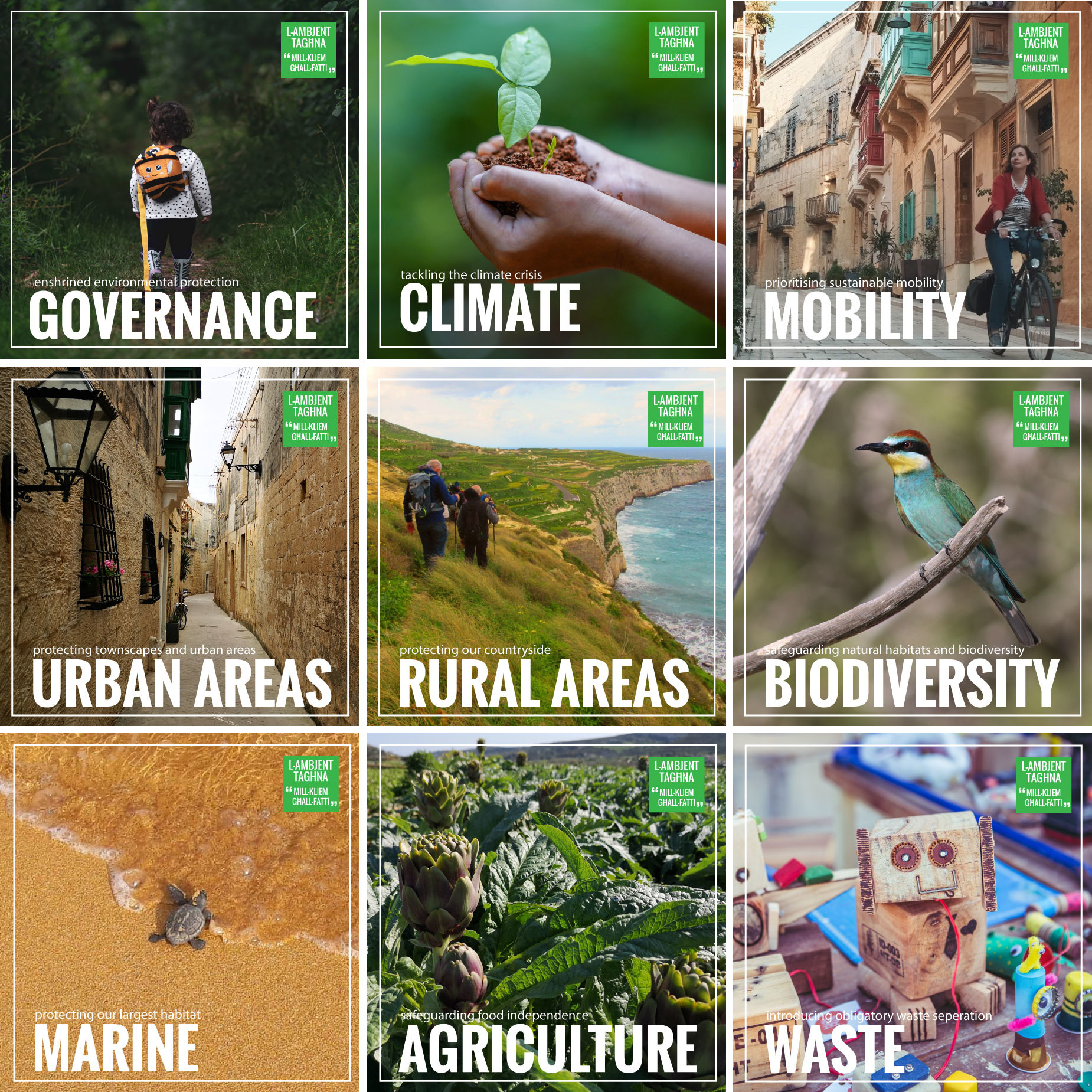 As Veggy Malta we believe that a holistic vegan philosophy believes in on a number of key pillars: human health, animal justice, social justice and environmental justice. All these are interconnected and thus protecting our environment is a fundamental value. In this light we fully support the recommendations by this united environmental front.

During the next few weeks the environmental organisations will be sharing a number of social media messages linked to these demands on their social media pages. Feel free to share them as well.

Here are the 9 pledges:

To entrench environmental protection, guardianship and the environmental rights of future generations into the Maltese Constitution. This constitutional right should allow all citizens the right to challenge the state or any public or private entity for enacting, implementing, enforcing or lack of it, laws, projects and actions that threaten this very clause.

To truly prioritise the climate crisis as the greatest threat to humankind and the planet that requires bold and immediate actions across all levels of government and society. This includes immediately halting investments in fossil fuel infrastructure and investing in renewable energy sources to achieve the EU 2030 target of 30%, as well as creating a fossil fuel free vision for Malta, including a plan for the clean energy transition.

To prioritise public and active transport modes, by investing in direct, frequent and reliable public transport connections and safe, direct and connected infrastructure for walking and cycling, while creating pedestrian areas in village and town centres. The priority should first and foremost be on reducing the number of cars and journeys made by car, instead of focusing only on the transition to electric vehicles.

To reform the PA planning board to ensure political independence and seek representation based on competence. The Superintendence of Cultural Heritage and ERA should be given veto power in PA application decisions. The following policies (SPED, DC2015, Rural Policy Design Guidelines, Tree Protection Act) should be urgently revised to better protect townscapes and rural areas.

To conclude and publish the 2020 Draft Rural Policy and Design Guidance, which has been in limbo since August 2020.

To protect public right of way on footpaths that have been open historically, while respecting the rights of land owners or tenants and creating  a database and map with information on land ownership and publicly accessible roads and footpaths.

To include the already proposed public domain sites (under the 2016 Public Domain Act), which, despite extensive public consultation and press lobbying (dating back to 2017), have not been granted protection so far.

To increase the proportion of land enjoying full environmental protection and extend the footprint of existing nature reserves plus establishing new areas for full nature conservation.

To strengthen the legal basis for nature protection by ensuring that ERA has full legal oversight on all environmental legislation and international obligations including bird protection.

To holistically and immediately address the spread of alien species before they further displace indigenous and endemic species and habitats forever.

To recognise that Malta’s largest habitat is the sea. This requires the authorities to provide the resources to adequately enforce and protect our marine environment against overfishing and illegal fishing activities, anchoring and dumping. The impacts and consequences to the marine habitat and its biodiversity needs to be prioritised in any marine-based infrastructure and land reclamation projects.

To safeguard our marine habitats and resources by promoting sustainable use and regulation. This should include regulating and controlling the impacts from maritime vessels on air and water including establishing the Mediterranean Basin as an Emission Control Area for cruise ships.

To increase agro-ecological farming practices, targeting that 25% of agricultural land becomes organic by 2030 and additionally reduce the use of synthetic pesticides by 80% by 2030.

To tackle the issue of food waste. This should include making the necessary legislative changes along with incentives for supermarkets and food importers and distributors to minimise food waste and to channel food that would end up in the waste stream to food banks.

To implement at the earliest an obligatory waste separation regime for domestic and commercial waste, and implement a strategy to minimise waste packaging. This should be supported by strengthened enforcement of existing rules.